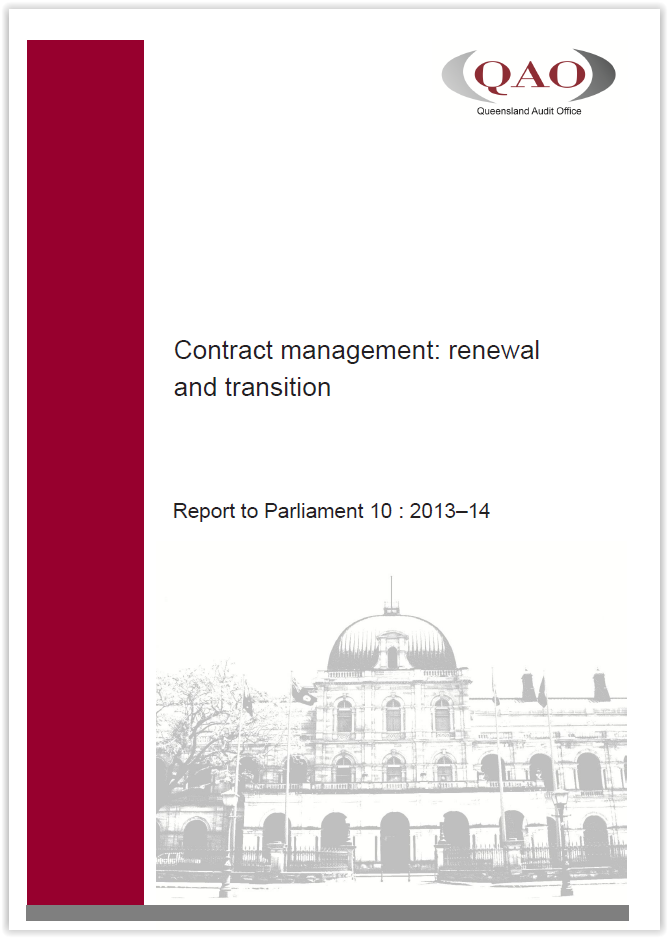 “Deficiencies in governance arrangements and contract management systems hindered the audited departments’ ability to plan effectively for contract expiry. By not flagging in advance that a contract was due to expire, the department did not give themselves enough time to plan for contract expiry and was more likely to extend without confirming that the current arrangements were achieving value for money” says the Queensland Audit Office.

A 2013 Queensland Audit Office (‘QAO’) report ‘Contract management – renewal and transition’ examined a total of 62 contracts from three major government departments’ in order to determine whether they could demonstrate that their decision to  extend, renew or re-tender those arrangements was based upon value for money grounds. The QAO found that the departments’ audited could not demonstrate that they had achieved value for money outcomes from these contracts reviewed and did not apply an appropriate approach to managing risk. The QAO noted that:

“Their ability to achieve value for money from their contracts was weakened by poor performance management of their suppliers and ineffective planning for contract expiry. They did not have in place sufficient contract management skills and systems to manage all their contracts consistency to the same high standards.”

“Long term contracts, in particular, need to be well managed so departments can realise expected benefits throughout the life of contracts. Effective contract management practice can also significantly reduce the overheads associated with contract extension or renewal”, says the QAO.

According to the QAO, “One indicator that the required contract management skills, systems and governance arrangements are in place and operating effectively is that, before a contract is due to expiry, the department has clearly established whether it should terminate or renew the service being provided or the goods being supplied; and, if it is to renew, whether it would achieve best value for money by extending the existing contract or by re-testing the market:.”

In relation to departments’ systems for managing contracts, the QAO observed that departments’ had in place inadequate systems to effectively manage their contracts. Weaknesses in their system capability included:

Consequently, one recommendation made by the QAO was to implement a contract management lifecycle system that could support more consistent management of supplier performance, spend analysis and provide an early trigger to prepare for contract expiry.